Posted on December 14, 2017 by Grays of Westminster 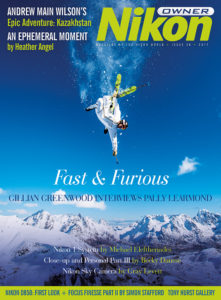 AN EPHEMERAL MOMENT
by Heather Angel
Heather Angel explains how she captured her stunning shot of an ice arch in Greenland.

POINT ME AT THE SKY
By Gray Levett
In 1938 an amazing camera appeared ten years before the first production of the Nikon One 35mm rangefinder cameras. Known only to a handful of Nikon historians, we bring you the Nippon Kogaku (Nikon) Sky camera.

NIKON D850 – A FIRST LOOK
by Simon Stafford
The new Nikon D850 is the talk of the photographic world. Simon Stafford gives us his first impressions and explains how it differs from other DSLRs in Nikon’s range.

ANDREW MAIN WILSON’S EPIC ADVENTURE
Kazakhstan – The Eagle Has Landed
Andrew Main Wilson continues to capture in one iconic image the essence of each country in the world; in this issue he visits Kazakhstan.

FOCUSING FINESSE: Part II
by Simon Stafford
In the second installment of his two-part series, Technical Editor Simon Stafford examines the use of autofocus in Live View with Nikon D-SLR cameras from the D3 and D300 onwards. 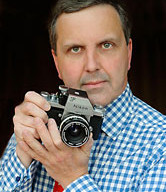 The new Nikon D7100: A Review by Simon Stafford

Which Zoom Lens Should I Choose?